The Festival opener, aka the Supreme Novices' Hurdle, has been kind to me down the years. If you're lucky enough to BE THERE, winning the Curtain Raiser gives you a lift like you would not believe, and I'm lucky indeed to have called home, in their turn, the Irish-trained Brave Inca, Captain Cee Bee and Go Native. It's a race in which the Irish have always excelled.

If you'd latched on to Jezki before Christmas you'd have trousered a juicy double figure price about this season's leading Irish novice.  But he's no bigger than 4/1 now (see his Xmas win here) so makes little appeal at this stage of the game.  Dunguib remember was a much hotter prospect not long ago, and he could finish no better than 3rd.

Despite Jezki's dominance there are still one or two unexposed types in Ireland.  In particular, Un Atout (20/1) for Willie Mullins has only won a maiden but he really looked the part that day.

Over here, the Tolworth winner Melodic Rendezvous looks solid at 14/1, with winning course form also on his CV.  Nicky Henderson, as usual, looks set to bring a couple of decent contenders to the table (River Maigue at 10/1, My Tent Or Yours at 14/1). It's barely credible that he hasn't won this race since Flown coasted home by ten lengths back in '92. And the unbeaten Puffin Billy (11/1) seems all set to give Oliver Sherwood one last hurrah in the big time - but he could be heading to the Neptune over 2m 5f instead.

But what about DODGING BULLETS at 14/1?  There's not much wrong with his form is there?  He won the Grade 2 at the Open meeting (a tactical affair admittedly - here it is) and then finished 3rd in the Christmas Hurdle outside novice company.

So why is the leading contender from the champion trainer's yard as big as 14s?  Maybe it's because he ran over hurdles last year and emerged no better than a novice. Maybe he's assumed now to be "exposed".  When they turned for home in last year's Triumph, though, he seemed to be travelling just about the best of them all.  Nicholls now claims to have sorted out a breathing problem.  And, of course, in Noland and Al Ferof he's also saddled two previous winners of the Supreme.

That'll do for me. The 14/1 is generally available but, if you're tempted, have a few quid on at 12/1 with Victor Chandler too because he'll give you a free matching bet on the day if Dodging Bullets doesn't turn up. 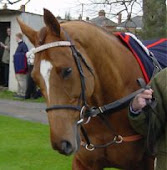